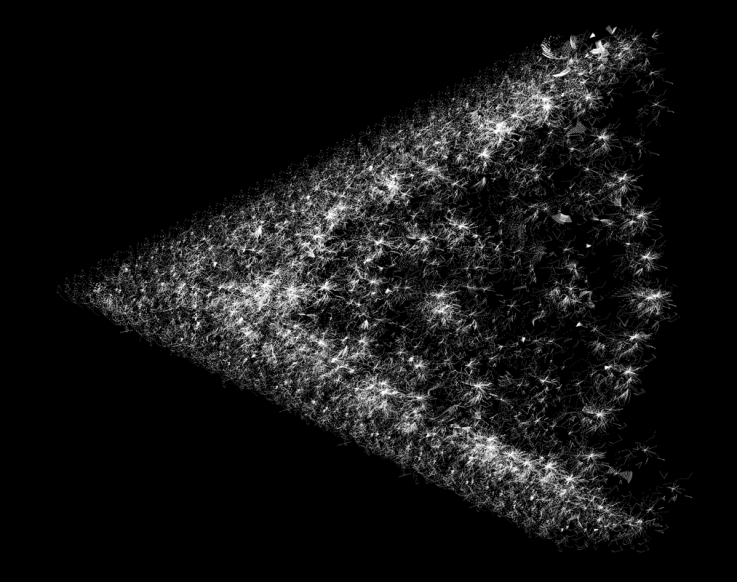 Kaspar is a double installation work.
– One room completely white with two prints facing one another. Each print is a 2d rhythmical and canonical structure composed of tiny dots. Those dots are so thin, they can barely be seen and the work look minimal from far away. Thanks to very high definition, visitors only realize the complex structure when they are close.
– Another room is completely black. Visitors read the timeline of a score imposed by darkness. This monophonic score based on dots is an evolution of patterns that can only be seen with a flashlight. This hold light imposes a timeline for the reading.
The piece is presented as a architectural project because its conception process is part of the piece.

Kaspar is one of the commissions from June in Buffalo 2010 where I was senior faculty with Steve Reich, David Felder, Bernard Rands, Roger Reynolds and Augusta Read Thomas. The interaction with these specific composer’s aesthetics was a windfall because of their respective compositional approaches.

Kaspar is a play from Peter Handke written in 1967. Peter Handke’s sprechstcke, through focusing on the performance of language, partake in the postmodern critique of representation. As a species of non-matrixed theater; theater which avoids the strong traditional fictional matrices of time, place, character, situation, and action, the “speech-plays” raise interesting issues pertaining to language, representation, presence, and performance. readable patterns in the dark room

This piece is more a visual piece rather than a piece where time is directly involved. Reactivity or interactivity are useless because of the way we are forced to look at the piece and the way it has been generated. The time component is part of the visual part and their interpretation themselves.

One is a fresco in complete darkness where visitors read a long transformation of patterns drawn along a wall.

These monophonic rhythmical patterns are composed on a single timeline from a microscopic and macroscopic point of view. Basically, this can be read as a traditional music score. Read at a microscopic scale, close to the wall, the reader can explore an evolution of similar patterns. Visitors in the darkness using flashlights can notice a more global progression by reading at a macroscopic scale or from far the wall.

A wide variety of elements, and maybe parameters can be added on these trees and this way bring the work to something more modernist rather just structural. For instance it would be interesting to add traditional musical writing. People are working on this conventional writing for centuries so it’s precision and generalization can often be adequate.

These rhythmic trees are composed of millions of microscopic dots for which the spacing has an importance both from close and far away. This case has only one dimension, but visitors can already notice the placement of the dots make interesting perspective effects. Also the distance between these white dots and the amount of doted lines make various grey levels.

Actually, these rhythmic trees have been generated in three dimensions. They then have been projected onto a plane and the third dimension is visible by the distance between the actually equally spaced dots. Everything is a question of perspective here. It is therefore possible to add dimensions and come back and forth from a number of dimensions to another by playing with projections. This important idea of projection is not a question of some pure cartesian and mathematical logic. It is a question of artistic choice and there are not only math behind this. The beauty, the magic of a piece is not only the piece itself but also the way it is received, looked at and explored. The same way the fact Kaspar has no technical link with the play itself, there does not need to think a practical link between the generated form and the musical result. The link can be anything else physical, artistic, esoteric or whatever.

One can make any kind of interesting form and make clever connections between entities and media depending on pure subjective choices.

Projection is a useful idea. Indeed after having created a complex form, one can project from several view angles then rotate the form. The resulting curves, planes or spaces on each projections will all have a logical constance between each other. Each curve can control continuous musical parameters. Each element can be a discrete musical element. In order to add an extra dimension to the trees, I have decided to logically place them on peculiar 3d spirals generated from Ulam spirals and polyrhythms.

Recursively rotated trees are ordered then positioned to each dot on the strange polyrhythmic spiral. I use minimalism for precision and hysterical realism, maybe maximalism, for reaching the edges of perception with complexity. print shown on one side of the white room 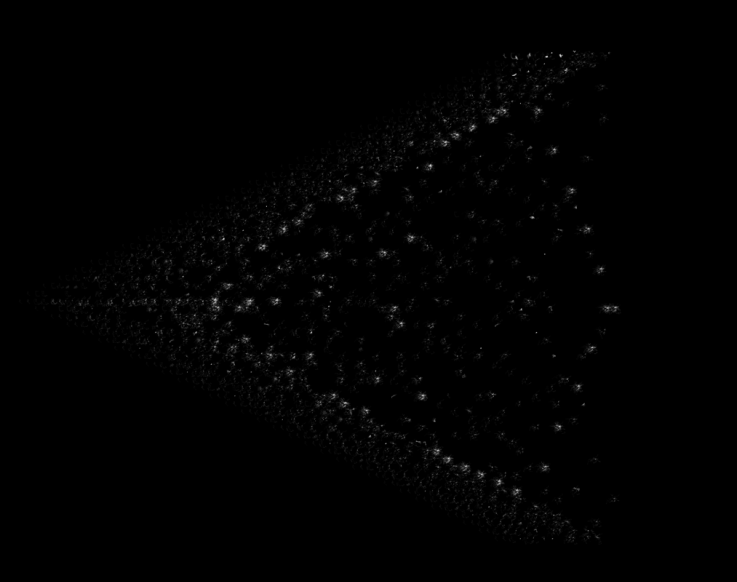 print shown on the other side of the white room

++++++ Room two : Two prints facing one another in white room

This process brings us to the second section of Kaspar is composed of two digital prints facing one another. They are mostly dark black so visitors only see a minimal black drawing when they are far away. They see the complexity when they are close from the frames. Now patterns are on a 2d plane, they can read across the patterns in the direction they want. They will always find some correlation between what they saw a few patterns ago. In music, memories fabricate time. This is the same here. One can remember and compare read patterns and their positions.

There is a real need to escape from the mathematical precision and pure abstraction of scores. Nature sometimes gives surprises of both precision and randomness. Dandelion grains have a similar mathematical model from the one created with the spirals. As an opposition, visitors can watch them with lenses under one of the backlight table. The second table is a smelly (important for the exhibition space) mold culture. Mold is made from bacteria that act like multi-agents systems. Stephen Wolfram describes how problems can be solved by iterating constrains many times. This is the case with cellular automaton for instance. Forms in Kaspar can be described this way because a succession of displacements and morphing give a rich pattern evolution. 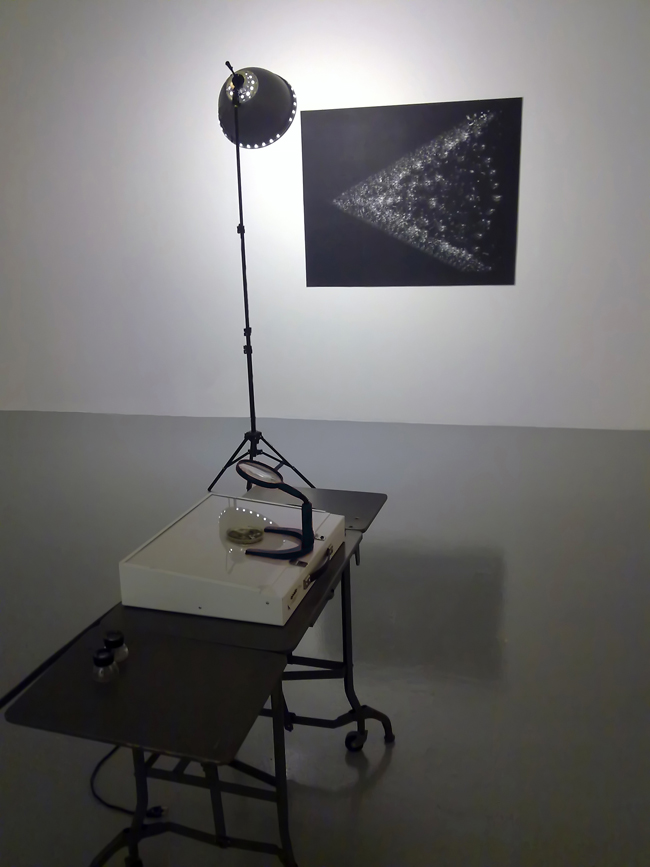 view of the right side of the white room

Spacialized sound is also diffused from speakers in the exhibition space. There are two exhibition rooms close to each other: the black and the white one. The visitor sometimes hears sounds in his room, sometimes in the other room.

The continuous part of the music is generated from mono-dimensional and 2-dimensional curves depending on the need to connect synthesis parameters. The discrete part is obviously coming from the rhythm trees.

Since everything is about structure, the simplest possible and most precise sound is needed. Piano could bee used in order to only concentrate on the patterns but thin and transparent sounds in high registers fit better. All sounds are beyond 8 kHz and visitors have to make the effort to listen to the tiny and super precise sound complexity because of high pitches and sound level. It is slightly the same as for chamber music where listeners go to the music rather the music going to them. All this has been coded in Max MSP for the audio part, python for the rhythmic tree generation, rhinoceros or rhino 3d and grasshopper3d for the design. The rendering was done with V-Ray. The concatenation was done using imagemagick.