Dual Coronagraphs is a generative installation piece for two video beamers occluded by a circle, with haze and eight aligned speakers in front of them. It is a commission from the Torn Space Theater and was premiered at Silos city in Buffalo, NY, on August 10th 2018. I would like to thank Dan Shanahan, Melissa Meola, Marisa Caruso, Alaa Zak Noweihed, Greg Robertson Jr and Eric Burlingame; the piece would have not happened without them.
A museum version was presented between March 14th and June 7th 2020 at the National Taiwan Museum of Fine Arts in Taichung among other pieces from Olivier Pasquet. Black Circle is a 1924 oil on canvas painting by Kazimir Malevich. In his manifesto, Malevich described the paintings as “desperate struggle to free art from the ballast of the objective world” by focusing only on pure form. This pure form is of dense emptiness, full of void. It therefore invites visitors to plunge into their own spatial and time imagination thru perception. Resulting Pavlovian interpretations are strongly linked with perception and thus various interfaces with reality. Photography plays an essential role in such correlations. That could then be inverted by photographing a true Nature. Malevich’s objectiveness would then well framed and rather easier to be cleared away by science, art and their relationship.

simulation of what happens with synchronization between projectors

Void is not void as soon as it is defined. This almost religious supreme state of baryonic matter is associated with what its container. There are as many voids as containers. Void is not void as there are then several distinct voids.
A circle is neither a circle. It is also a container delimiting composed complexities between mental depths.

Coronagraphs are initially photographs. They are artificial circles containing an inner complexity coming from Nature; ornamentation. They are telescopic attachments designed to block out the direct light from a star so that nearby objects. Most coronagraphs are intended to view the corona of the Sun, but a new class of conceptually similar instruments are being used to find extrasolar planets.
Coronagraphs can be synthesized as composed Nature rising from the darkness, coldness and unknown end of a concrete building. Resulting interference between layers create fast and musical light rhythms that are synchronized with sound. The slow acceleration over time provides the empty impression of falling into void.

Two large and long concrete corridors contain one coronagraph. They are both full of haze and in obvious opposition; patterns between each tunnel, visible before entering, are out of phase. When one is dark, the other one is bright etc.
Visitors have then the choice of entering in either corridor. This decision is primary and determines the consecutive and deterministic part of the visit. Each coronagraph indeed displays different light patterns with macroscopic composition forms. Their obvious divergence allows visitors to compare each exploration and experience. Those artificial coronagraphs are in fact quickly turning and sending strong bursts of light against concrete walls thru a thin haze. Slowness and power of processes allow people to fully integrate the minimalistic aspect of the piece. The circle has two sides; one opaque facing visitors; another one mirrored so light from the projectors can sometimes be reflected towards the latter Audience in front of one of the two video beamers for that 2018 version; almost religious

The technical system is rather light: it consists on one video beamers, one haze machine and two speakers for each corridor. The whole machinery is a computer generative system controlling together light and sound over the period of the exhibition. This aspect provides a sense of a romantic artificial Nature and autonomy to the piece. The evolution of the composition stays within a defined frame. Visitors have then the possibility to come back.
Each speaker is located at the entrance and the end of each corridor. Echos are somehow communicating between the outside and the inside depth. Such echos are like delays generating sonic interferences against the walls. With enough acoustic pressure, visitors clearly feel gradient from subtle sonic bursts while walking from the outside towards the unknown inner part; tiny rhythms bounce against walls all along the depth.
A video beamer hidden by one aluminum circle projects generative patterns against the smoke. Visitors are almost blinded. But they are still attracted by the depth and the strong beauty of the building reflected by lights. Those light sources are sometimes barely visible. But their sudden bursts underline the concrete and metal of the architecture. 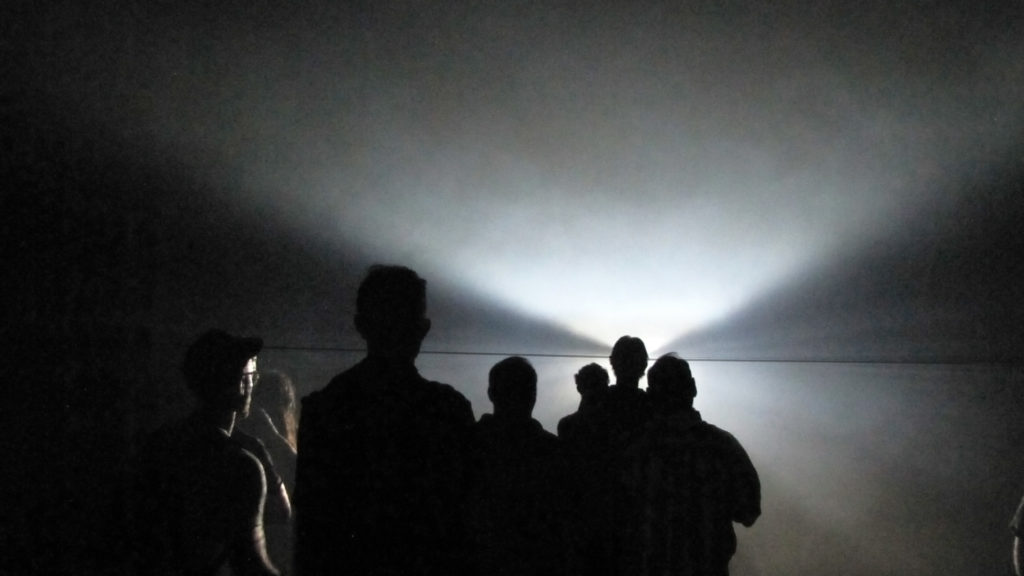 Grain elevator is a perfect historical place in the US for such a monumental and powerful piece.
The museum version, presented in Taiwan, is different but still strong 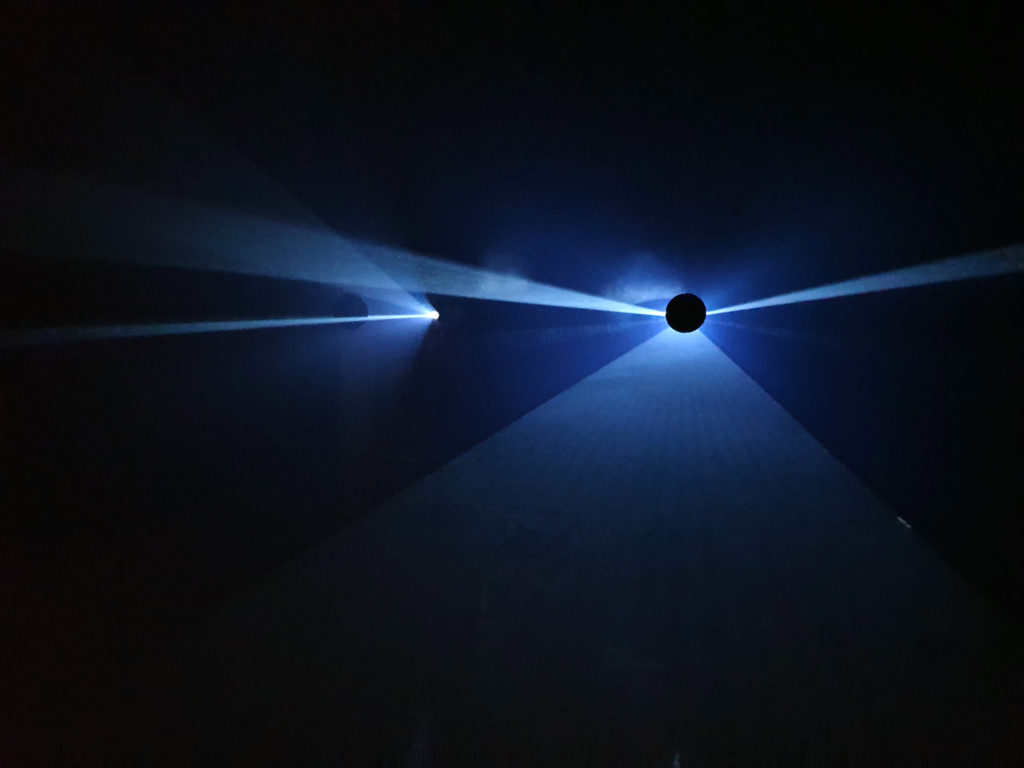 For the Taiwanese museum version, each eight-minute long generative version has a different white color. Visitors are invited to compare multiple versions since they are generative and change all the time. The blue color is sometimes used only for the duration of a bling of an eye US version; the precision of beams is here visible; a dark line is indeed visible and slices the horizon into two distinct moving parts Opposite situation from the previous picture with a horizontal white line 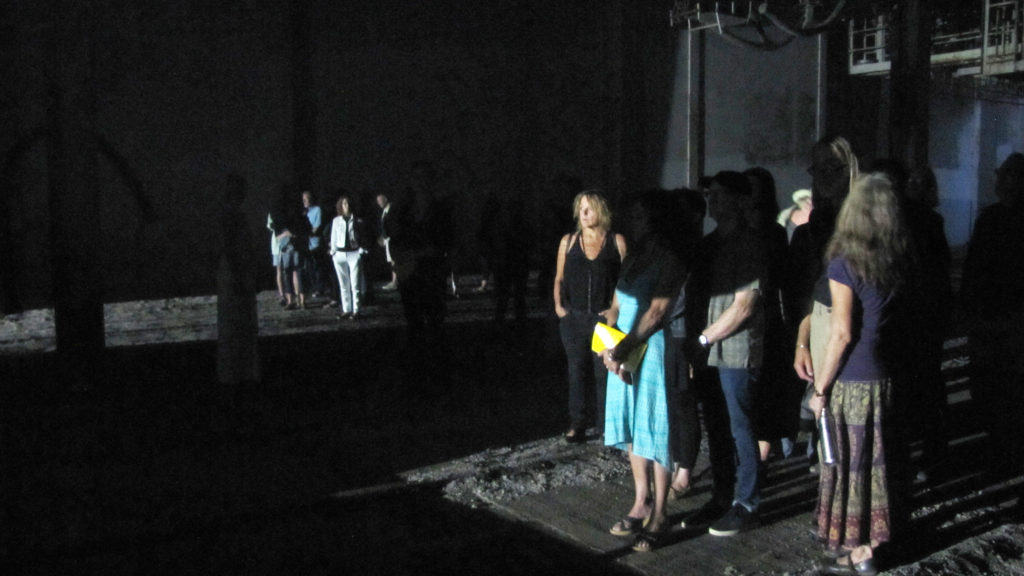 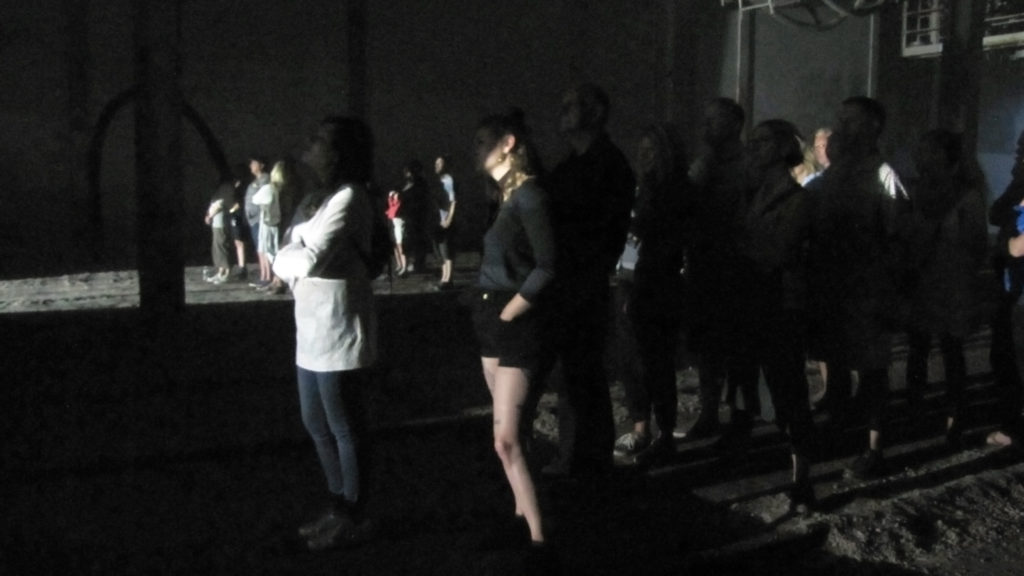 The audience has the tendency to be aligned behind each circle. Another one consists of replacing the circle and stay under the shadow of other visitors.
This is the interaction with the audience. One can easily imagine people converging towards lines created by the projectors and their reflections against walls 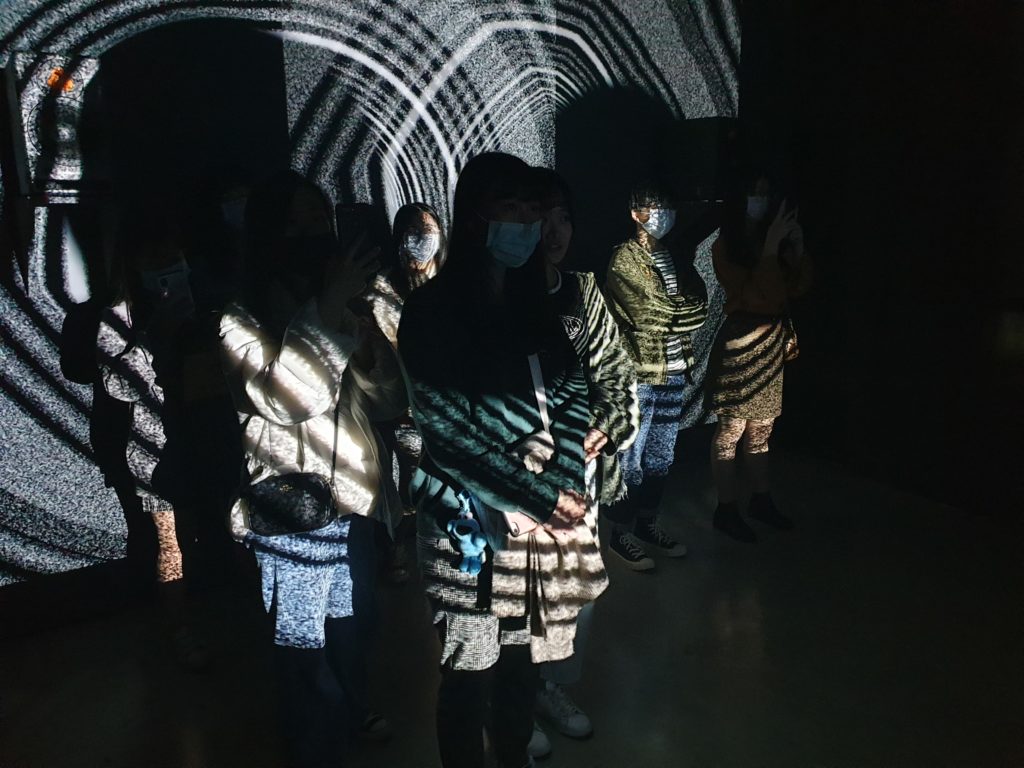 Visitors against walls’ reflections in Taiwan’s museum in 03 2020 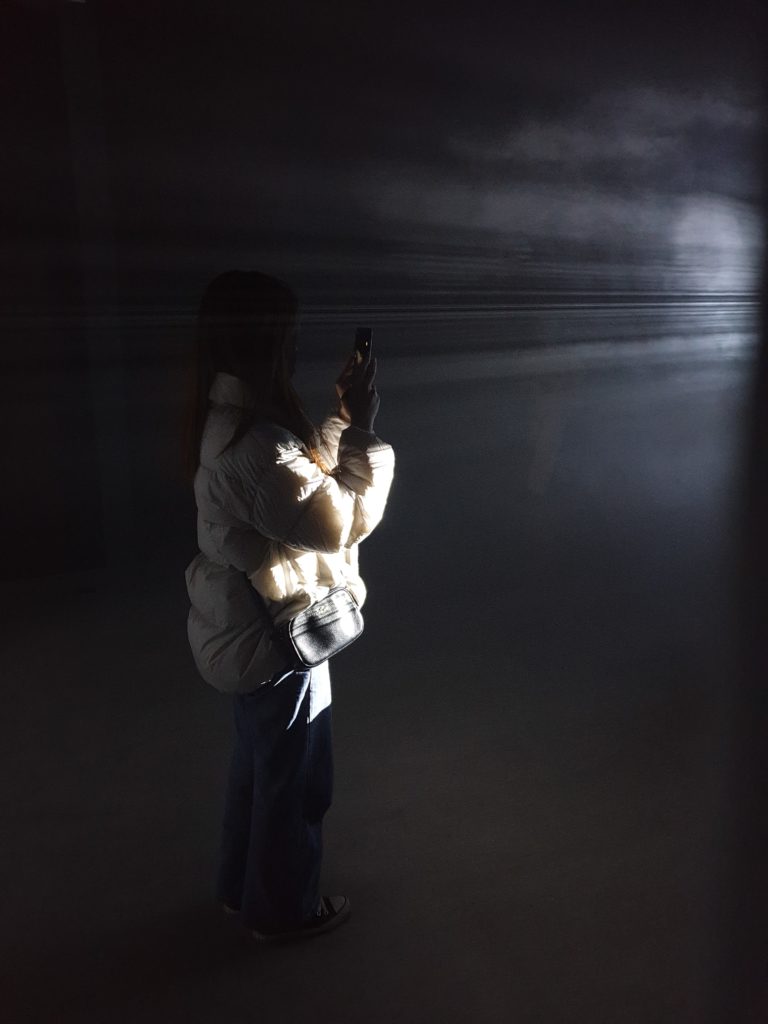 One can see how thin are the fast rhythmical moving lines 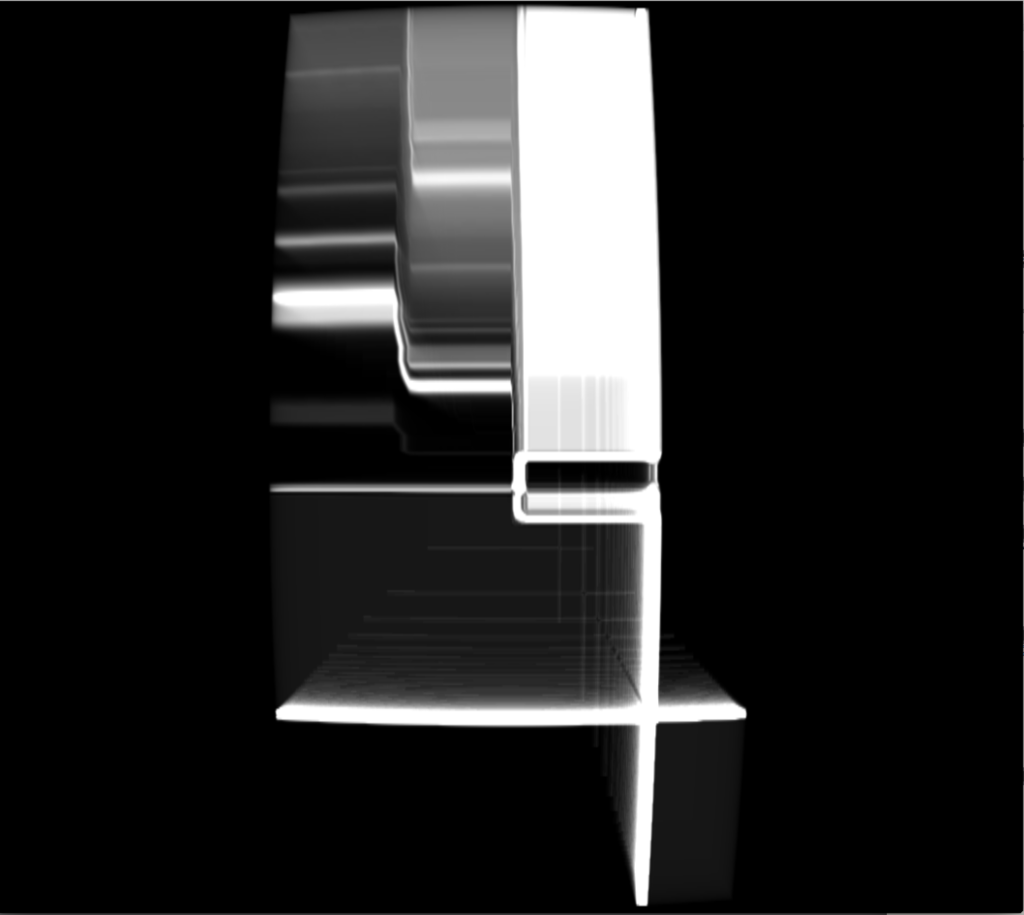 Computer shader showing what each video beamers is projecting. It is inspired by cathodic raster tubes.
Its curvature is taking the exhibition space and position of video projectors into account