Lloyd’s Mirror is a commission from the Creative Art Initiative. It is now official and will be shown at the Eleanor and Wilson Greatbatch Pavilion, Buffalo, New York, US, the week of February 12 2018. A more accurate and eventually real documents will come by then.

The building shown in the below picture is a glass pavilion inside a garden, surrounded by trees. In that example, specific for Buffalo, reflections on glasses add deepness to the light sculpture. Each glass is also slightly different (both refraction and diffraction) and thus changes subtle mirror effects. Thus the Lloyd’s Mirror used for interferometry.

Each white dots is a white laser projection onto a wired chrome structure; a physical ray-tracing. They are not always enlightened together but rather blinking according to a generated rhythmic musical score. It is not a Christmas tree but rather very much a moving light composition as Otto Piene used to do at the end of the 1960’s with complex mechanics: https://goo.gl/WPZeEw. This time, mapping is computer controlled and thus avoids having endless and automatic looping.

Using a low power laser allows a huge subtlety in spacial and rhythmic movements. It also enables a huge variety of intensity levels depending from which side the wired structure is being seen. The piece is indeed yet another mapping experiment but using something else than a screen allows both a full integration inside a specific space, and a piece visible from any side. The building in which the structure is located is also important because it brings the notion of inside-outside alongside all the questions of representation. It also sets the piece in a specific environment which visitors would discover with another eye as they usually see it. Finally, building made of glass or with mirrors somewhere increase deepness and dimensions to the entire space.

The visual part of the piece is associated with timed elements allowing the juxtaposition and composition of audio and visual elements. A speaker system therefore sends musical interpretations of a generative score which is in common with light positions, sliding and blinking. Then sonic particles also spread in a time and space quantized by the constraining wired structure.

Both two examples on the left show interleaved patterns. When zooming in the pictures, one can see a variety of little elements related to one another; like a waveform. They are simply a score enlighten by the laser. One can also see a game with shadows and superposition; polyphony in a way. The mesh can some from a totally artificial concept. It can also decline from a representation of landscapes for instance.

Each tiny pattern drawn by the laser is an element which can also be related to a sonic element. The position is simply and directly connected to the rhythm. Projection is an important factor. Indeed, everything depends on the angle where the visitor is located. This is in fact also the same issue with acoustic diffusion. Spatialization from speakers has then to take visual positions into account. Visuals also have to take sonic positions into account.

Visitors can then listen to particles moving around in a traditional way. But they can also listen to what I usually call envelope spatialization where sound grains are both sonic and spatial; particles have various lengths and are projected very fast to specific positions in the acoustic space. The positioning and dynamics are rhythmically controlled and thus become fully part of the composition.

I had the chance to experiment this technique in David Felder and Brice Pauset’s pieces. Felder’s spatialization brought some material connections with live instruments. In the proposed piece, envelope spatialization brings combinations with a space itself. A space that was in place before the piece was being played. This is alike organ music in a church where a time and a 5ocial event is given to the hall at the moment of the performance. Here is one of many audio pieces that can give an aesthetic idea : http://www.opasquet.fr/s-pictoris/

Visitors, or the audience, not only experience a pure visual piece outside the building but also a true concert experience from the inside. They can sit or walk around the sculpture and somehow freely interpret that synesthetic object. They are invited to read the apparent patterns rather than only watch the piece from outside.
The fact it has a beginning and an end will create an event and then influence concentration. The piece would be 50 to 60 minutes long. This linearity also leads the audience towards a kind of dramaturgy (zeitgeist) they can follow and transcend.
Each run is nevertheless different. A computer program generates the macro and microscopic form. This forms mostly comes from the research and pieces of the past years. The same idea has always been used; from its most elementary to its more complex form.
As one probably previously understood that the proposed piece is intended to be minimalistic using aggregated simple sonic and visual forms. This is very much linked with computer art from the late 1970’s, early 1980’s; an aesthetics period I am very fond of. Manfred Mohr, in the picture above, is a pioneer electronic artist. Far from being an extravagant style, he rather composes visual generative pieces visitor tend to readers interpret as a musical score. He used hyper-cubes as a starting point for all his pieces from his first exhibition in 1971 to nowadays.
A similar idea is proposed in that piece. It is not my intention to play an extravagant laser show with loud lights and sounds. It would rather be dimmed and subtle enough visitors would be invited to get closer from the building when outside, or closer to the structure when inside; a true chamber music situation. This is where the use of laser gets its fully meaning. Alongside sonic grains, these visual grains are tiny enough (high-definition) they are just symbols.

Not giving a cultural context of the piece would be much less interesting and could eventually just lead to a technological demonstration. This is a very complex but interesting question with media-arts in which the medium or the setup is a piece of art by itself. I here decide to use the system as an instrument that would also offer the opportunity for a collection of historical pieces to be played in a unique context: a re-materializations of classic computer music pieces which have a strong link with mine. It is also a very good pedagogical chance to share and interpret relatively unknown important pieces. Depending on the question of rights, I would think of pieces which are not always the best ones but rather a selection that would best fit for that event (sorry, mostly German composers !)

Those pieces are obviously presented in the form of a performative installation event. It would sometimes be shown as a concert, sometimes as a running installation depending on how long the space is available. No theatrical dramaturgy, nor political subject is raised. It is rather more of an abstract generative (never the same) and transcendental trip (linear time) transporting the audience in a musical way. But I know there will nevertheless be a human impact.

The complex consists of six interconnected buildings designed as a unified composition, including; the main Martin House and a pergola that connects it to a conservatory and carriage house with chauffeur’s quarters and stables, the Barton House, a smaller residence for Martin’s sister and brother-in-law, and a gardener’s cottage added in 1909. The landscape design for the grounds of the complex is highly integrated with the overall composition of buildings.

Over the decades, the Martin House Complex suffered considerable damage and three of the original five buildings were demolished. In 1992, the Martin House Restoration Corporation (MHRC) was formed to raise funds for and oversee a complete restoration of the complex. Extensive reconstruction and restoration efforts began in 1997 and are ongoing today. In 2009, the MHRC opened the Eleanor and Wilson Greatbatch Pavilion, a visitor welcome and interpretive center designed by Toshiko Mori Architect. Frank Lloyd Wright was an American architect but also a dealer and collector of Japanese art. The fact Toshiko Mori designed the new addition of the complex is not by chance. I wrote her for some questions and she told me she would be delighted to see such an installation in the Greatbatch Pavilion.

That building is almost like a canopy and stands in the garden alongside the Darwin Martin House. The assimilation of both modernity are not in opposition. The link is easily defined by their large roof and squared form. Perspectives are nevertheless antagonistic. The house is made of bricks and offers a positive perspective which is in opposition with the new building because one can see thru its glass walls. This short description is just an illustration of how well both styles are integrated. 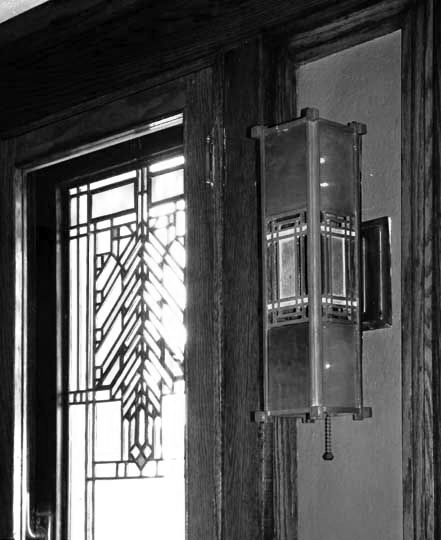 This typical Japanese stylistic superposition is just an crucial element in the overall composition of the garden and the city itself. That composition is mostly based on oppositions; antimony between a (supposedly) cold post-industrial town and all the warm houses downtown and in the suburbs. Superposition, positions and densities are decisive concepts and actions when working in terms of minimalism.

This future audio-visual piece consists on recomposing the inside-outside impressions given by both buildings within that garden. This would be executed using moving light particles in space and sound particles in time; a complexity into simplicity.

Tony Conrad was a UB faculty member since 1976. His was one of the many pioneers for minimalist music and video art. He passed away last April and I though this would be a good occasion to dedicate him that piece. I am mostly thinking about the audio visual piece The Flicker (https://goo.gl/WdXOzJ) which is all about transcendent rhythms and phases; exactly what I am personally after. 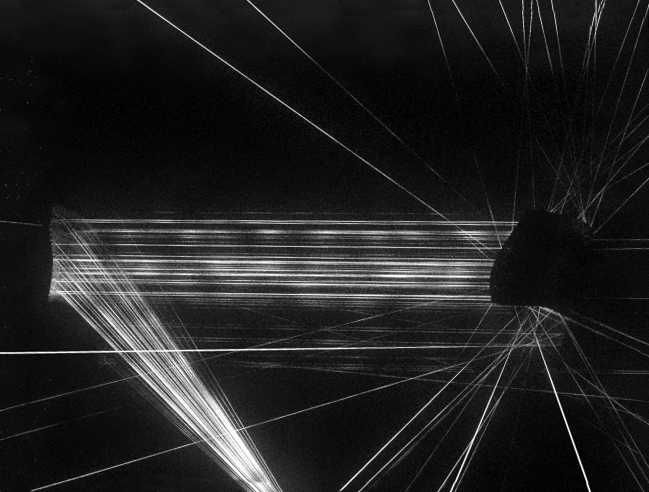 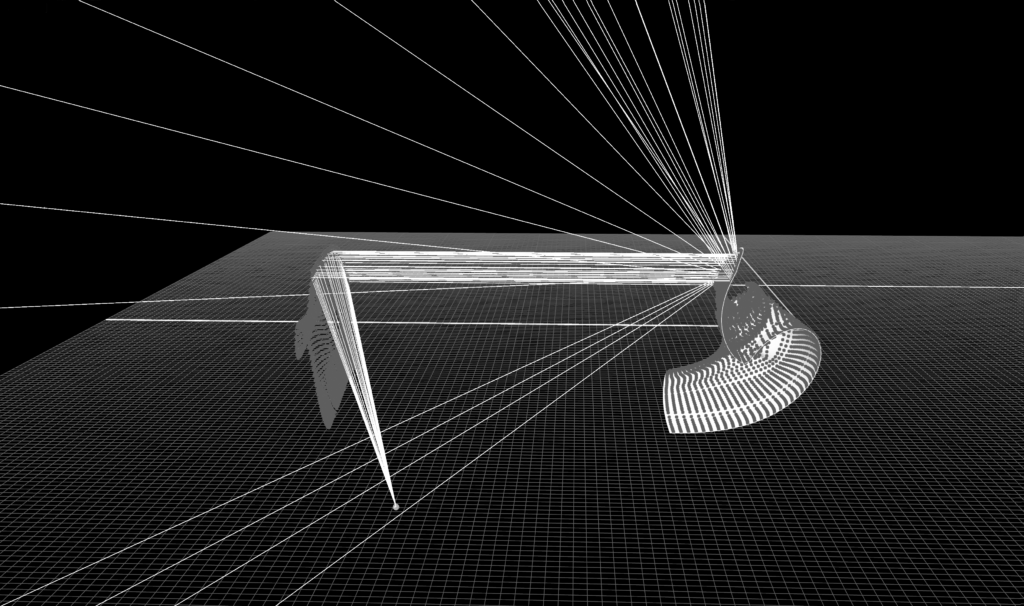 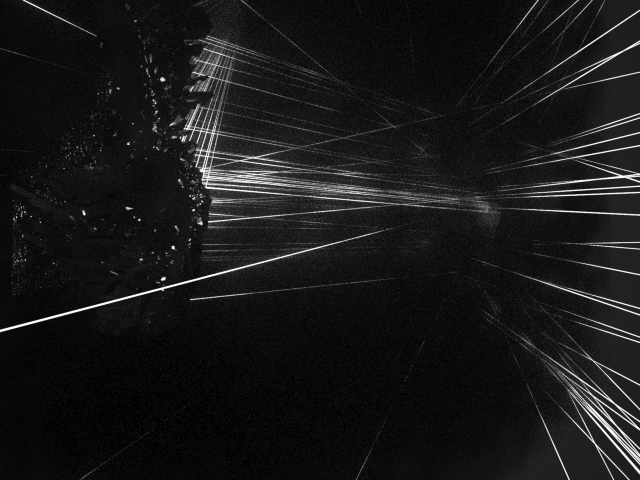