The Lolita’s image has often been used. For instance, Madonna in Hard Candy or Stanley Kubrick with the 1962 Lolita movie. The Nicolas Obin master thesis explains the context of the piece very well. You can have a look at his interesting website.

Lolita springs questions about the status of a piece of art where such a novel is nor reality nor fiction. Does it have to be a precise transcription of reality or does it have to be a fiction very far away from reality ? The first written modern novels where published anonymously in order to keep a certain reality of the text. This way, history of modern novels can be described as a transition from a “I” — allowing some distance between the author and the book itself — to a “He” – allowing the writer to give a fictive position for each actor between themselves and the real position with the novelist himself.
For Nabokov, the role of a piece must be understood and undertaken as pure fiction. In other words, it is not a platonic mimisis, the attempt to make a projection of nature and its natural things to the piece. A work is rather a transfiguration of reality : “Art takes simple things from the world to give them some marvelous form”. A creation is only justified when it is detached from all references from reality. For Nabokov, a piece of art is not based on facts, natural timing, historic occurrences or even referents. Nabokov even goes farther by revoking all available notion of objective reality, objective event. There are only “stories” that are contaminated by the story teller himself. Seen at this point, the frontier between fiction and reality is more and more unclear. Can one find reality in fiction or does fiction leaks into reality ?
The Nabokov’s universe, thru his novels and his real speeches, is essentially fictional. He is probably the only one who knows on which side is the information he gives. The real writer projects himself in his text using doubling and some kind of primitive falsification. His voice goes thru several fictive narrators who will operate a falsification and mystification.
Fictive narrators of Nabokov are forgers that have always been mentally sick; mad of completely mad. John Ray, also a fictive author, describes in the fake preface the main character Humbert Humbert as someone “abnormal”. For him, the story could probably become a classic of psychiatry. In that story, Humbert Humbert is sent to a psychiatric hospital and describes himself as an artist doubled by a mad person. Everything is so connected to madness that liability is completely blurred. It even includes the imprecision of fictive narrators and writers themselves. All these mental illnesses engender such an important doubt a question about a true reality rises. Did all these facts finally really happened ? In fact the referential Lolita could really have existed but it rapidly sinks into fantasy. When Humbert Humbert says “Oh my Lolita” it is all about imagination and game with words.
The possible link and existence with reality, fake reality and the story become even more blurred when Nabokov intentionally make mistakes or inconsistencies in the text itself.

Nabokov’s text is the absolute predominance of the authorial logic against the story logic. The fact the author lies already generates several mixed-up voices; doubles. Multiplied words of the author become mixed to the voices of the other characters of the novel.

Taking place entirely within the obsessive mind of its narrator Humbert Humbert (played by François Beukelaers), the opera is played out before the audience as a projection of what is in the mind of Humbert, whose back is to the audience the entire time, although every change in his facial expression is recorded and revealed by the video projection. Taking place entirely within the obsessive mind of its narrator Humbert Humbert (played by François Beukelaers), the opera is played out before the audience as a projection of what is in the mind of Humbert, whose back is to the audience the entire time, although every change in his facial expression is recorded and revealed by the video projection from Kurt D’Haeseleer. 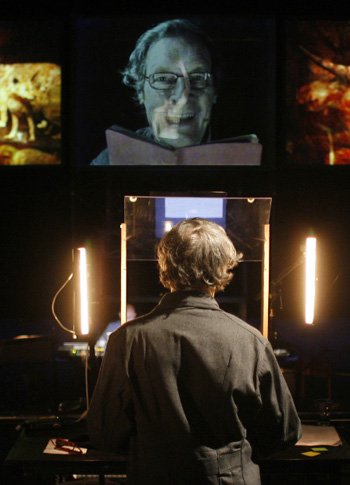 humbert humbert facing the prompter in the middle of the audience

The ensemble plays a kind of music called spectral music. This compositional technique became known and defined around 1984 with the music of Gerard Grisey and Tristan Murail. It became a real movement in the late 80’s and this was probably the last artistic movement we have seen in classical contemporary music. There is a precise reason for that but I will not explain it here.
Spectral music consists on the analysis of sounds and their transcription to traditional musical notation. Results concern verticalities; mostly chords and resonances. Often those chords are rather long and the music slowly evoluating. That is the case with Lolita’s music.

Since it is spectral music, analysis has an important role in the piece. There is an obvious link between dramaturgic elements so that “text becomes sound becomes music”, as Joshua Fineberg says. This is done from several analysis-resynthesis processes. Text is heard from Humbert Humbert and Lolita thru singing. But the central voice element is the narrator.
The analysis-resynthesis process can first be found on the instrumental score. Harmonic structures from the narrator is played by the ensemble in a way his voice becomes a central object.

analyzed harmonic structures from the narrator

Lolita’s singing is a rather special process. It consists on building a singing voice from the narrator’s one. Therefore some reseach has been done for segmenting his spoken text. voice alignment has then been done for synchronizing his voice with the wanted rythms of a Lolita voice. The Ircam talkapillar was used for that. Finally some proper transposition was done for getting the right pitches and articulations. Transposition is done by keeping the initial spectral enveloppe. Joshua Finberg and Axel Roebel worked a lot on that.
This way spoken voice becomes sung and it finally becomes something musical. This allows games going from the narrator’s spoken voice to the sung one from Lolita. Doubles and interpolations are thus made. This is symbolically very useful because in the text everything is fiction. Everything comes from the narrator himself; even Lolita.

The realtime part of the electronics also consists on analysis-resynthesis processes. Partials are analyzed, filtered then resynthesized with additive synthesis. The filtering wipes off useless partials by taking masking effect into account. This process and others were done with the tools I use(d) the most MaxMSP and ftm.