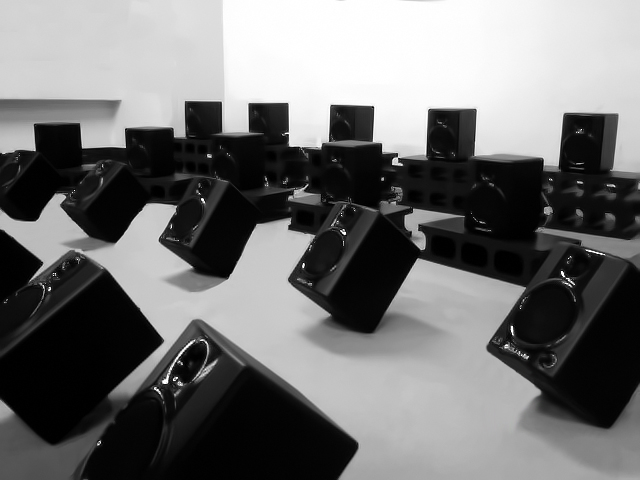 Sound Agents is an installation research project from JFLI and University of Tokyo hold in 2009. It is a rich intellectual collaboration with scientist, curator, director and artist Philippe Codognet.

The motivation is music production using complex systems multi-agent simulations, exhibiting emergence. As many generative pieces, the resulting music is never the same every time it is played. Nevertheless similarities between plays and the fact they spring from the same artistic decisions made me think them as a one piece.

The system is not aimed to create graphics unless some visualization is needed. The only spatial creation produced by the system are sound movements in the exhibition space. The behavior of the multi-agents initiate a composition at a microscopic time scale. The emergence from these comportment generate a macroscopic time scale. Therefore, the choice of given rules to each agent is consequential for the musicality of the system.

Sound Agents follows traditional artificial life and self-organizing concepts like swarm intelligence, such as ant foraging. The piece can then be seen from several points of view. It could be an inspiration from nature. It could also be a completely abstract compositional technique. These kind of computational systems are very powerful for optimization and can be seen in many elegant complex problem solving using iterations. Since babylonians, it is another approach for composition but machines are nowadays helping. Instead of writing musical events one by one, or instead of constructing musical events from bricks, one describes a more global scheme which constrains will write musical events in an interesting way. There are connections with additive and subtractive composition techniques. These three compositional techniques are useful and a modern composer should be aware of the three available approaches.

For instance, time is an important factor in the conception of granular synthesis or 12-tones techniques. A technique that has a temporality is more easily musical. This is why its fame lasts longer in music history. This is the case with all computational systems because iteration are their point. Most serial music techniques can simply be described by computational systems. Rather a cellular automata, an ant foraging system was chosen because of its interesting convergence/divergence evolution.

Its convergence over iterations can be explained from simple rules. Ants are randomly looking for food in a space. As soon as they find food, the leave a pheromone trace behind their path and come back to the anthill. Every other ant crossing the pheromone path changes its direction and follows the path away from the anthill. It get food and comes back to the anthill using the same rule as the first ant; leaving a pheromone trace behind it. The more ants will take the path the most smelly will be this specific path and the more ant will follow the path also leaving pheromones on their way back. After many iterations, the ants will have found the shortest paths from the anthill to the food, this is an optimized path. The magics lies in the fact that ants do not follow complex rules but their collective intelligence made they find one solution to a complex problem.

It is very often difficult to make a connection between the beauty of such systems and music. Even when we are dealing with purely musical issues, it has always been difficult to musically interpret the results. Such connections is called mapping. It should not be to obvious nor too complex for our brain to understand the art piece. Therefore, some direct connections with musical parameters have been done but some more layered connections have also been done. The visitor does not have to understand everything or even anything but it has to “tell him a story”.

This is how music rises from the multi-agent ants:

This system has been chosen for its convergence over time. This characteristic allows a variety of music forms and spatial movements going from something wide to something narrow. Another reason is the behavior of the ants themseves along time. The evolution of the individual path taken by these agents goes from random when the ants are looking for food to non-random when the ants have found the best path and when they go back and forth between the anthill and the food.

These specific characteristics have to spring from the mapping between parameters for the sound and the agent system.

As for many music pieces, Sound Agents is organized with several sound layers or tracks. This choice was made for having a more intelligible conceptualization of timbre classes and structural layers of the piece. Using tracks also allows a clearer feeling of what this specific ant system can do.

The scheduler running the agents is not obviously linked with the timing of the music piece. Everything depends on the needed amount of epochs of the system to converge and the needed length of convergence in the music. Also the way time is calculated and its segmentation can differ. Time for music could be directly the same as the one from the system. It also could be driven by any event happening in the system. For instance, every time an ant gets into a new segment of space, the musical time makes one more step. The first and direct solution has been chosen ; the needed time for convergence on the system is also the length for the musical events to converge. A master clock has been chosen rather using the clock from the multi agent system. This way the amounts of time are the same for both but their segmentation can vary thus both the music and the agents can run independently as many events as needed. At regular real-time ticks, this clock reads the position for each active ant (orange) and the amount of pheromones in the plane. This is also a way to get a pulsation for music. Using a pulsation is not an obligation but since rhythm is important here, it is perceptibly important.

The ants are followed one by one. Their path is individually tracked and each has a specific sound or pitch. The sound differences between ants are very subtle though.

One layer, or track, is concentrating on rhythm. Several classes are stored in a tank. Using rhythmic classes is often convenient because it gives an intelligible redundancy and a better beat synchronization between one another. Each active ant (orange) is triggering its sound with the rhythm corresponding to its position. Also, in the system setup, each active ant is positioned at the same coordinates as the one in the multi-agent system. Therefore, high pitched percussive sounds has been chosen in order to get a precise feeling of positions in the space. Theses tiny pitches are also esthetic opposition with the other sounds. This layer could thus be see as the lead.

The closer the classes are from the food path, the simpler are the rhythms and the less they are in the class. This way, the rhythmic evolution goes from something quite chaotic to something almost minimalist and repetitive. The food path is roughly known before the start because the position of the anthill and the food are decided by the user before-ward.

Another layer is dealing with the quantity of pheromones and its distribution in the space. It is a continuous accumulative ingredient over time. One radical and efficient way to describe it is distortion. The more pheromone there are the more distortion there is on a continuous base sound. A pretty harmonic and smooth continuous sound has been chosen as an opposition with the bright and tight rhythm sounds. Harmonics are continuously evolving and getting more and more distorted with a tube overdrive digital model.

The two other layers are pure musical choices and have no concrete link with the agents. But, although their presence is musically important, they perceptively and meaningfully enhance the layers using the agent system. It is part of the mapping but done indirectly.

The third layer is a bass drum. The complexity of the first rhythmical layer needs a bass drum in order to segment time and better perceive rhythmical phrases. This bass drum is giving a pulsation in the same way Indian music would do with a triangle and a mridangam. It’s triggering is probabilistic so it does not always appear and it is not too obvious. The right amount is constant. This “right” amount is empirically chosen by taking into account the very complex beginning of the process and the more minimalist ending of the high pitched rhythmic track. Also the opposed second track, going from harmonic to distorted has to be taken into account. This bass sound does not need spatialization in the space.

The last layer is made for linking everything together. The listener does not have to concentrate on this one but its presence it rather important. The synthesis for this track is made of 8 chaotic oscillators. This alloys an expressive and continuous evolution of thin and precise sounds. The muddle evolution, continuous and pretty fast, could be felt as a voice. Since its tessiture is right in the middle of the basses and high pitched rhythms, it could have the same use for the piece.