Steve V (King Different) was premiered in March 2014. It is a commission from Opera de Lyon. Fabrice Melquiot wrote the libretto especially for this so called “multimedia opera” directed by Roland Auzet. I do not personally think it follows the actual form of an opera so I would rather call it; a theatre-music piece. The action is set in Silicon Valley but based on Shakespeare’s Henry V play about the harsh king. Steve Jobs, the king of marketing, and Henry V, king of England, are both inside the same character for a show that uses excerpts from the original text. Although 500 years separate them, Steve Jobs and Henry V have more in common than at first glance. They both fought hard, drawn-out battles for their crowning victories. They were both fighting against Microsoft or the French at Agincourt in very similar human and personality conditions. The overall piece has close links with the several Steve Jobs biographies [1].

The instrumental part contains a wide variety of styles with abrupt changes. The music indeed comes from many inspirations from other musics. The result tends to be post-modernist with many citations rising questions about copyrights on sampling [2].

Three singers play the role of the apple men. They are constantly on stage and follow the main actors. They sometimes become soloists when articulating sections. The main characters are Steve Jobs, his cancer and a former employee who got fired as badly as Jobs had been before-wards. Those three characters are playing in a very different way and they all come from various backgrounds; that also has an important influence in the electronics. A traditional opera singer, an actor and a star rap singer are part of the show. It results here again with a huge stylistic gap between parts thus enriching the piece by an even wider variety of styles.

Fixed sounds are played all the way in conjunction with the ensemble. The main compositional idea consists on following other musical parts using analysis or hearing. For instance, the instruments would follow the prosody of a speech that would be said at the same time. In the same way, the electronics would follow the instrumental part or the opposite. Depending on the initial material and what would be done, several techniques were used: manual transcription or an audio to midi algorithm found in Ableton Live, or transcribe using nmf [3], or simply pm2 for partial tracking and chord sequence analysis. The analysis is usually never good enough. Not only for pure technical reasons but also because transcription is a subject that needs to primarily be defined [4]. It is the exact same problem when transcribing for acoustic instruments; it is important to focus on what has to be kept and what can be removed. Even more, it is important to be able to intentionally add or remove events for other musical reasons.

One of the most difficult part is verticality, or synchronicity, between composed material and real-time events. The timing of Steve V is fixed since it is a written musical piece for ensemble. Synchronism is somehow easier for fixed music than improvised music. Although difficult to follow deterministic music, it is another kind of difficulty to follow half improvised music or a mixture of music, visuals and many other events. Antescofo was initially used [5] and continuous tempi variations could then stretch audio files and effects timing accordingly. Unfortunately too many visual cues and other non audio events could not be followed or triggered by an audio score follower. A classic midi pedal and at some moments a click-track for the conductor were therefore used. Antescofo ended being useless. 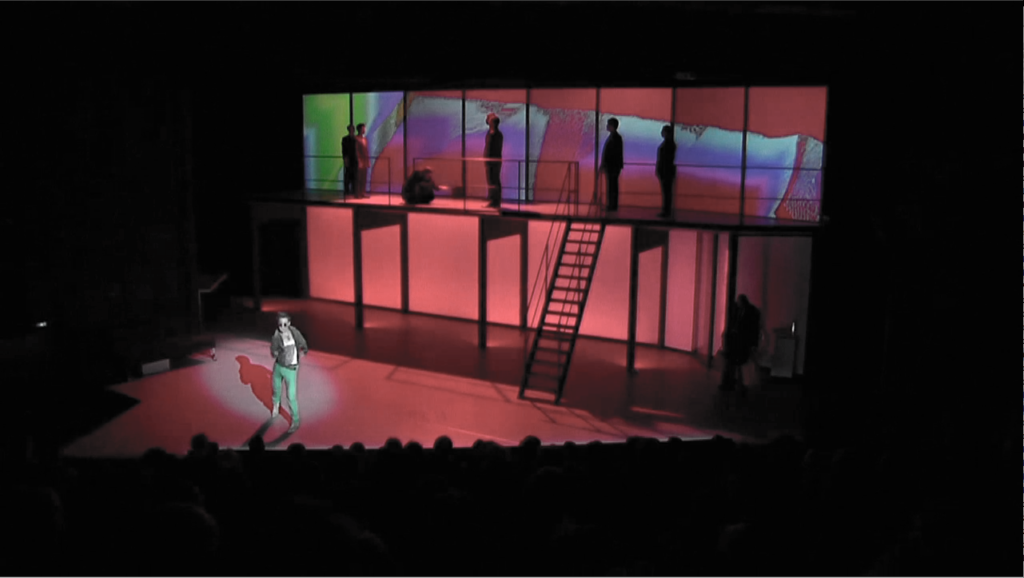 Steve Jobs is dealing with his cancer all along the piece. This is one important dramaturgic aspect of the libretto. What Jobs has lived and will live in his future is questioned here. But his present moment also has an importance. His cancer, who is an actual character, interferes and parasitizes him. The disease is sometimes side by side and some other times inside him, controlling him. The ambiguity of interweaving is accentuated by the use of one sensor.

Using sensors has always been a complicated questions because there barely is a good reason to implement it in a show if it does not become an instrument. They can often be replaced by a manual control making people believe in some kind of synchronicity. When truly used, it is difficult to find an interesting and musical interaction; mapping is indeed a primordial question. It oscillates between incomprehensibility and too obvious interconnections. In Steve V I used one sensor hidden in one glove of the cancer. Both acceleration and orientation (simply using quaternions) were connected to a granular synthesis engine and a harmonizer transposing the voice of the Cancer. The Cancer, Michael Slattery, was really good in playing with gestures while articulating his sentences. It was only used once in the piece, was not too obvious and was a long evolution leading from an obvious voice effect to total chaos.

The sound engineer, Sylvain Cadars, did a great job because the ensemble was located behind the stage and nine people in the front. The direct sound from the instruments was absorbed enough I could do things we cannot normally do when instruments are heard directly. I rather decided not to use any effects to avoid falling into a kitsch situation of only amplified effect. I just amplified in a peculiar way using envelope spatialization at some moments. 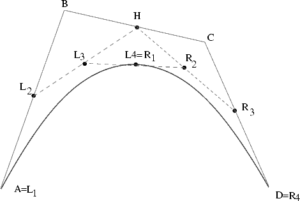 I very often used this kind of spatialization in pieces like the Perspectivae Sintagma series for example. The sound is sent to all speakers on which the opening is individually controlled by a rhythmic engine of LFOs or discrete envelopes. There is panning when envelopes are overlapped and there are sound grains otherwise. When periods are fast enough, the incoming sound is modulated thus creating phasing effects or a strange ring modulation. There is no question of sweet spot because the importance is not position itself but rather its changes [6, 7]. This time, rhythms and their tempi was played live during the performance. This allowed me to really fit with the playing of instrumentalists, actors and singers.

Excepted for some long FM synthesized notes the main esthetic of the electronic part of Steve V is very close to pointillism. This is mostly due to side-chained controls, envelope spatialization and diversified granular syntheses. These granular syntheses are either controlled with micro-rhythmic patterns using jtol or controlled stochastically as it usually done most of the time.