The brightest body in the constellation Piscis Austrinus is Fomalhaut. It is also one of the brightest stars in the Earth’s sky. This sun is surrounded by several debris disks and at least by one exoplanet called Fomalhaut b. hr 8799 is based on micro-elements one can barely intercept. Micro-visual elements are indeed many, they all have a different shape and their organization create a complexity almost impossible to apprehend by humans. Reading this organization of patterns nevertheless brings to the discovery of an artificial solar system, a new imaginative world. The same way astro-physicians discovered Fomalhaut by reading abstract data on their machine.

The aggregation of such patterns generate constrains [1] and forms [2] in the exact same way letters may transport a reader thru a book [3]. Each grain of light is like a letter. It’s form, it’s spatial position and the way it is organized with its neighbors give a meaning to the overall assembly. The meaning comes both from the book itself and the imagination of the reader. The ambiguous border between randomness, noise, and true understandability allows imagination to exist. This boundary changes accordingly with the comprehension level of such complexity.

The piece is a score and a piece itself. The score is recursively the piece. It invites people to discover the spectacle of an abstract self-organized universe with its own rules and it’s own history [4]. Images are build of a white laser projected onto a complex virtual structure made of chrome. It creates a halo and very bright reflexions because visitors are in a very dark environment. The position of these reflexions is spatially composed and they are moving following specific micro-rhythms. The structure is the constrain [5] and the laser is doing mapping as if it was video mapping. Reflexions give the impression they self organize themselves and create readable aggregates. Visitors are invited to read the piece thanks to very strong contrasts, very weak brightness and high definitions (4096×3072 or 600 dpi). Video screens or beamers, including Retina displays, are not quite ready for proper contrasts because I am more looking for something like e-paper. This would allow readers to concentrate on the content rather the shininess of moving images. Also in the case of moving images, the tempo is slowed down at the limits of perception using time stretching with the optical flow Twixtor algorithm.

I believe Karl Otto Götz‘s computer pieces or Manfred Mohr‘s work from the 1960’s and 1970’s have not really been continued. There are plenty of audiovisual pieces but very few are actually space compositions in the literal terms. It is more usual to watch synesthesia [6] or visualizations [7] rather read a graphical description music as if it were a musical score [8].

Here are some links to give an idea of dark matter spacetime composition and the inspiration of this piece.
• karl otto götz
• hr 8799
• deus project (dark energy universe simulation)
• paper 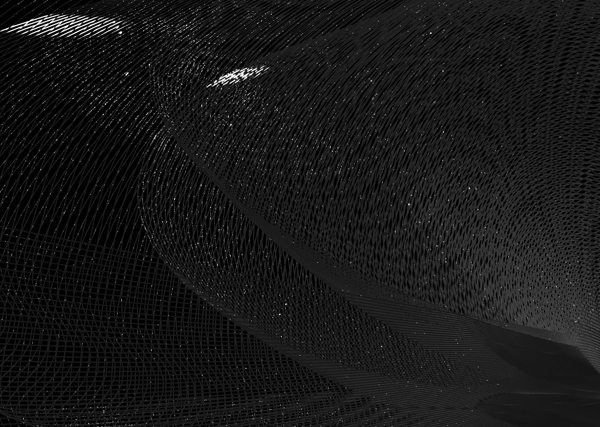 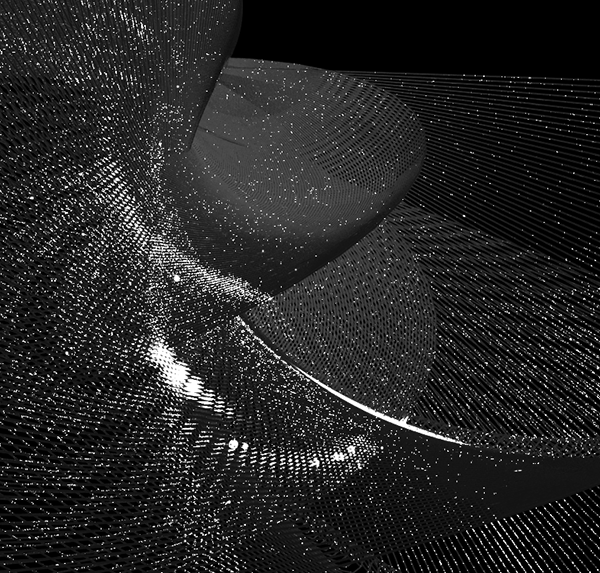 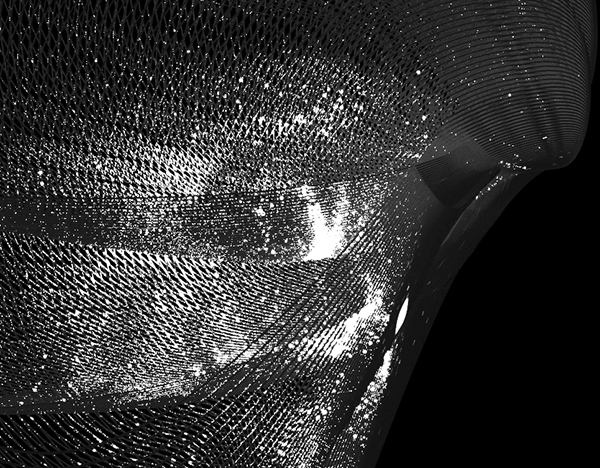