the last stand of masatsura in the battle of shijōnawate _1857

HPSCHD is a piece for two harpsichords. Its title comes from HPSCHD composed by John Cage and Lejaren Hiller. Unlike the latter, the piece will have no electronics. It will nevertheless be a generative one in the tradition of Hiller’s Illiac Suite.

A completely different parallel is done with amazing Japanese ukiyo-e (浮世絵 – “pictures of the floating world”) style woodblock prints and paintings; popular from the 17th through 19th centuries. Utagawa Kuniyoshi‘s pictures of the 1348 battle of Shijōnawate (四條畷の戦い) are perfect examples.
In this beautiful composition, one does not know if each separate frame shows one same soldier in various times or several ones in one single snapshot. There is no time here. The battle is unbalanced since 3000 soldiers fight against 6-80000; death is obviously imminent. Characters fight against arrows, against the only possible entropic time direction. These small size drawings are much more impressive in reality than they do on a screen. 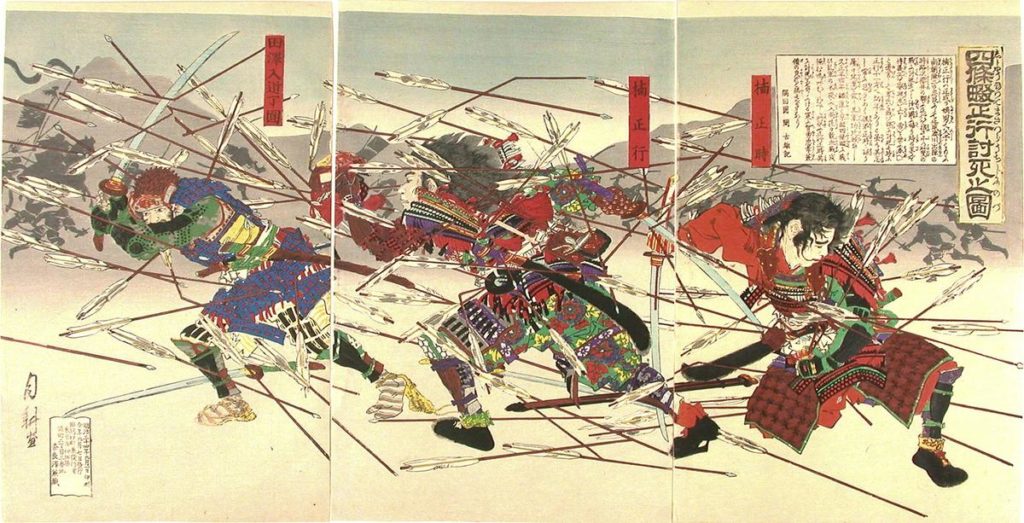 One must then wonder where could the relation between HPSCHD and ukiyo-e stands; beyond japanism, any other westerner view of Japanese culture or the fact I often travel to Japan.
Harpsichord uses plucked strings that sound very thin, powerless and metallic. This reaches the precision I am often after with electronic music. Multiple relations between layers of tradition, novelty and modernity are something one finds in contemporary classical music with live instruments and electronics; one of the characteristics found at Ircam for instance. These same layers are encountered in Japanese art. It is in fact the case for every cultures but Japan has the tendency to superpose those new layers while keeping the previous ones. More generally, rven though styles evolve, they still belong to an unforgettable historical context. Culture is after all a question of memory…
There is therefore a relation between craft and art: connections between common techniques used for ukiyo-e and personal ones defining a singular style. The use of thin ink of ukiyo-e corresponds to the precision plucked strings could make.
Ukiyo-e are prints and can be reproduced. The coloring is later added by hand and makes differences between reproductions. That is the same idea with my music when I can generate versions of a same piece that can be compared as one would compare instrumental interpretations.
But the most important interest remains the actual narration of these drawings. The 1348 Battle of Shijōnawate was a battle of the Nanboku-chō period of Japanese history, and took place in Yoshino, Nara. It was fought between the armies of the Northern and Southern Emperors of Japan. The Southern army, led by Kusunoki Masatsura was attacked at Yoshino, the temporary palace of the Imperial residence. Feeling too weak to defend the residence, Masatsura marched out with his whole force to meet his assailants. Kitabatake Chikafusa, meanwhile, led his force towards Izumi, diverting some of the attackers away from the palace. Kusunoki engaged the enemy commander Kō no Moroyasu in single combat, and, it is said, was about to take Kō’s head when he was struck by an arrow; Kusunoki then committed seppuku. The battle ended in a Northern Court victory, but the Southern Court fled Yoshino, leaving little for their enemies to capture.
Instruments are touching against one another. One of the harpsichords remains rhythmically uniform while the second one will change over time as it fights against patterns imposed by the first one. Auditors get a sense of accidental microscopic rhythmical moiré between both instruments.