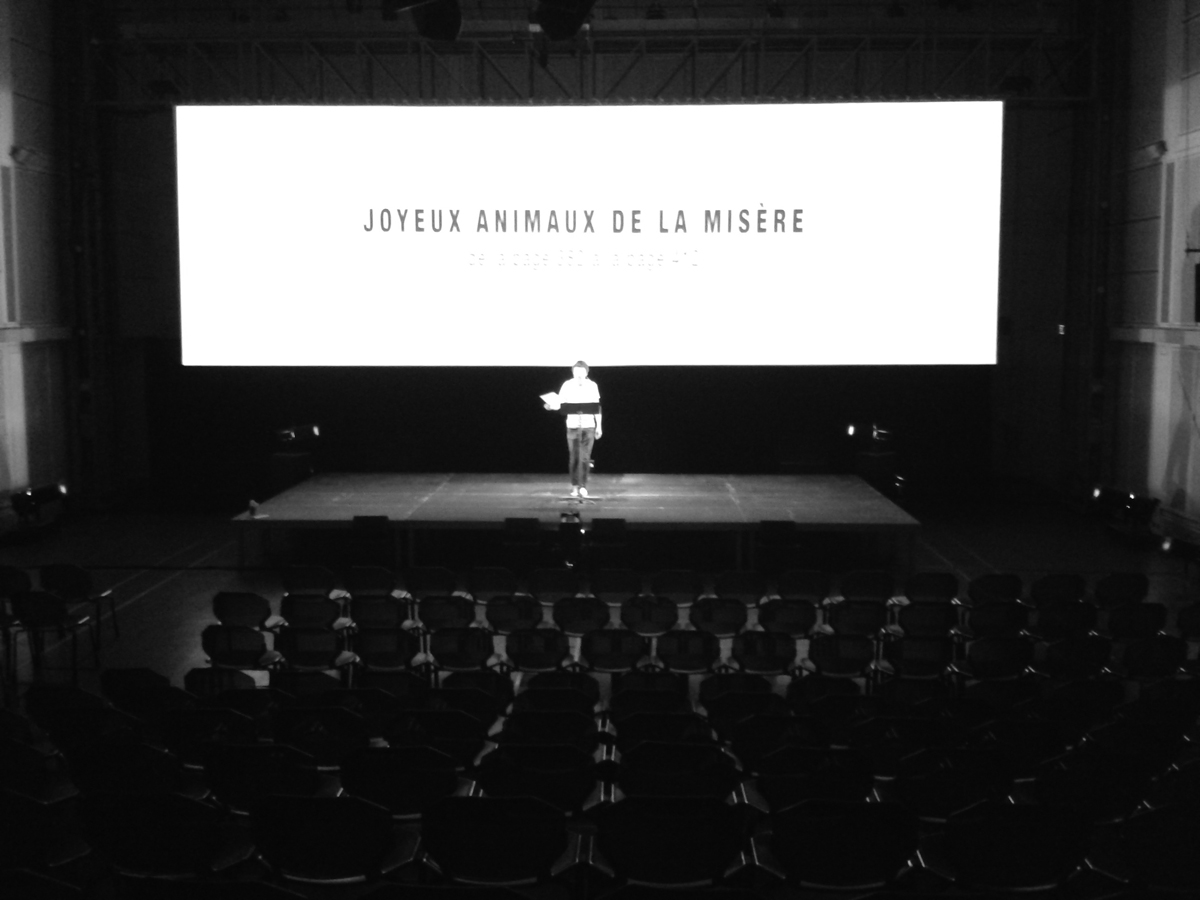 This piece for voice was premiered at Ircam in Paris in June 2014. The specialty of my commissioner, Ircam, should normally be the question of interference between arts using the same media [1]. For instance, the mix between electronic music and instrumental music generates many artistic and social questions. It is the same interesting matter between spoken text and music.

Here is an interview from Jacques Henric for Artpresse.

Pierre Guyotat fulfills the promise of the De Sadian stuttering. He makes assemblages with the borders of the human body and its fluids. He got commissioned a new book by Gallimard and Ircam. Joyeux Animaux de la Misère contains 412 pages of rich and well written hardcore text. Guyotat composed it in a formal way where almost every sentence uses the French “que” preposition instead of another word. The abstraction level is then increased and character changes are blurred. His work appeals me in the same direction as poets like Olivier Cadiot or Gordon Lish. It is nevertheless not totally a typical 1980’s poetry with its formal abstraction. Abstraction is rather placed inside the meaning itself; these writers browse from one nested meaning to another in the same way one would browse in hypertext. This is important for musical decisions of the show.
In that particular situation, the stage director Stanislas Nordey decided to be a little brechtian. With minimal lighting and video showing titles, the audience can only concentrate on the reading. Nothing else happens on stage; it is simply a reading. This is an appropriate choice because it helps following the winding of the text. This nothingness is therefore far to be total vacuum.

A lot of material was prepared for the first rehearsal. But the piece would more be challenging than usual because of the conditions of work. The performance is indeed opening the entire Ircam festival. Also it has become a real creation for the media although it was initially supposed to be a performance in preparation of a real piece that will be performed in fall 2015. This is a very usual situation but, this time, we only had five rehearsals opened to the press etc. Moreover Stanislas Nordey closely follows his initial radical idea of reading the text in a pure way. He leaves no breathing and his prosody is neutral and continuous with no breaks. This anecdote demonstrates a usual situation where I usually use several main orientations to solve it. Working in French theatre is very different from dance, German music-theatre or Japanese Noh theatre. Text is fundamental and the space for freedom needs to be circumscribed. Music should underline the meaning, transport it somewhere. But it should also interrupt, distort and transgress it when needed. This is totally a question of orchestration from both the sonic and the dramaturgic points of views. These choices have a drastic influence on the resulting aesthetics.

The first choice concerns more collaborators and deals with the balance of the entire piece. The amount of music and its moments of rising need to be openly discussed, or secretly decided, with other artists of the project who are aware of the dramaturgy of the text. Silence can be defined by its surrounding music before-wards and afterwards. Or it can simply be a silence with no context. I often think of Claude Debussy. The piece described here is a good example where the simplest solution consists on composing interludes between sections. Unfortunately the length of the piece and the respect of suffocation brought by the reading makes the performance far too long. This is nevertheless what I have decided to do. These sonic intervals would eventually overlap with the text despite of what was nicely advised by Guyotat.

The second strategy consists on playing on top of the text with the positive or negative question of interference. It is possible to play with the dynamics of the sounds. For instance, voice rhythms can create musical counterpoints and accents. This can be formalized then automatized with envelope followers or speech recognition systems for instance.

As a third choice, it is also possible to create sounds with a different tessitura from the voice. This is very useful for a particular style of electronic music where most of the spectrum is on highs and lows. I personally like basses for their power and highs for their perceptual precision and beauty. Labels like Raster Noton are applying such aesthetics in a music which the listening mode oscillate between so called “popular”, “contemporary music” and “modern art”. The discrimination between “musique savante” and others is anyway obsolete. All sides have a strong history; they sometimes require knowledge, sensibly and advanced production techniques. Whichever how they are supposed to be diffused and listened, they are all culture [2]. In any social case and way of listening, such extreme music goes beyond the limits of playability and explores edges of perception and understanding. It is the “state of the art of the art” for the audience; a little less for instrumentalists. I believe playing with perception is the starting point of a research toward minimalism.

Simplicity is not an end in art, but we usually arrive at simplicity as we approach the true sense of things,
Constantin Brancusi

A fourth strategy consists composing with what happens on stage as close as possible. This is what happens with theatre the most often because it is the easiest possible proposition. It is also what a stage director wants if there has been no communication or interest between the theatrical part and the musical part. There are nevertheless very rich directions to explore when trying to stay as figurative or even naturalist as possible. Composing from initial staged sounds can be a very good starting point for a whole piece. This is what I have done with La Nuit Tombe, a previous theatre piece. For Joyeux Animaux de la Misère, the text has no meaning that would allow such figuration.

But there is the possibility to use real-time transformations on the voice. These transformations are the starting point of something musical. One would hear direct transformations that would then be later heard again in another time, another position thus generating the music. I used both the ambisonics and WFS systems available in the Ircam’s concert hall [3]. I already used this diffusion system on a dance show called Night Light.

The back cover of Guyotat’s book presents the situation in a future and probably in an other galaxy. The rest of the book does not implicitly comes back to this description. I was inspired by extraterrestrial voices from Neill Blomkamp movie District 9. Psola re-synthesis made interesting voices as dirty as the text. They were then positioned on stage using the WFS. They only made incomprehensible halos behind the reader to avoid hearing a tiring direct voice effect for one hour. Psola synthesis is a kind of controlled granular synthesis. It follows the fifth possible strategy.

A fifth choice consists on marking time with sound events short enough they can be heard without always interfering with the text. Rhythms are indeed very important for Joyeux Animaux de la Misère. In that situation timbre does not matter so much. It is more question of events, onsets, with stage and speech. I found this technique very efficient because it can do everything; it can oscillate between accompaniment of the speech and a total distortion of understanding [4]. When sounds are very short, the result stays purely musical and is totally independent from theatre questions. It can nevertheless be used to cut or accent stage events. But when sounds are longer or when the density of sounds increases, time scale changes and the musical result is more questioned with the stage.

I very often consider rhythm as the skeleton of music. It structures music or its listening both in a microscopic and a macroscopic way. Beyond traditional counterpoint [5], it raises questions of structure and generation of a complete music without thinking about timbre; only a skeleton that is music in its entirety. Beyond percussion, piano or harpsichord music are often music with no timbre; or at least a work on timbre which is very different from usual. I am thinking about Etudes Transcendantales from Brian Ferneyhough, Neuf Canons from Brice Pauset or even Duet from Milton Babbitt.