This theatre-music piece was created at the Théâtre de la Renaissance in February 2013. It is an audio-visual form for children composed around a libretto from Fabrice Melquiot and directed by Roland Auzet. It includes video, a virtual character and an actor.

The piece is a face-to-face meeting between an actor and a virtual character. The play-write is a musical theater for a young audience with a fundamental questioning of the ingrained in our everyday society technologies. The text places spectators through stories where usual questions about technology are asked. Questions mostly asked in the 1990’s. What is virtual reality, where the boundary between the real and the virtual are? What drives people who want to create virtual worlds? The translation of the virtual is always based on “elsewhere”. But why one of the two worlds is superior to the other? The universe has no other meaning than the one we give [1].

In Aucun Homme n’est une Isle, the virtual character Oscar [2] is moving between two screens. One behind the actor in the rear of the stage and one, made of tulle, in the front between the actor and the audience. This setup and the stage design gives the public the impression both the actor and Oscar are living in the same universe. Movements are programmed in a similar way than for a true puppet.

Long pure synthetic sounds containing very high pitches fill spaces all along the piece. High beatings can often only be heard by a young audience. They are also often long phase evolutions moving in an intimate and artificial space with no echo. Prosody processing onto voice is also rarely being used for Oscar’s voice using a mixture of Vocaloid and Melodyne. 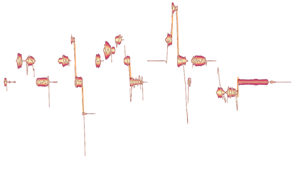