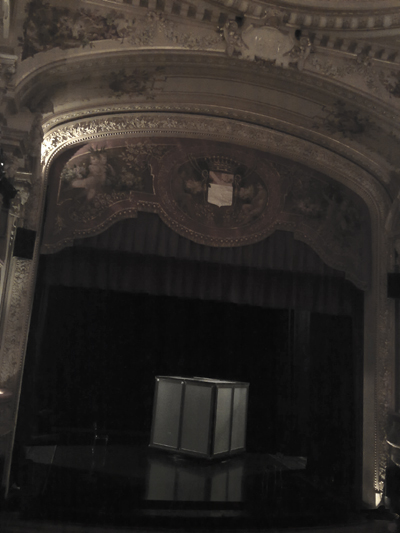 A house, occupied by two women, Ethel and Maria. Or sisters or friends, two women linked by the impression of a man who, years earlier, administered his violence, as he gives a child his sleep medication. We know very little about the conditions of their detention. How he feed them, beat them etc… But since, they live poisonous, venomous, seeking the brute in every man they meet. During those nights when they use to go and meet men in bars where they get lost. Addicted to a violence they chose to maintain, they decided to make masochist contracts with strangers in order to better dominate them. When they return home, they find him back, him, the only beast, the destroyer, the thief of small girls. It is their turn to lock him up. They feed him, administer their violence. Because he must pay, because they must pay with him, this violence goes up to the pleasure and is wanted until the death is reached, glorified as much as cursed. The concept of the stage is rather simple. It consists on a square of thin water in which both women walk. Two chairs and a large cube made of metal and glass reflect in this water floor. The bass singer is inside the box and never escapes from it. The two other musicians are outside the square. The accordionist is on the left side and the electronic musician in the hall with the sound engineer.

The box is a cage for the beast. This prison can change its opacity thanks to a special glasses. This system, which is called privalight, has been given by the Saint Gobain glass company. A polarized lcd layer changes the opacity with electricity. This way, it is possible to synchronize the opaqueness for each glass of the box with music. I made simple permutation effects in relation with the music, the live effects of voices and the dramaturgic needs.

Theatre music is interesting because the music part is in close relation with stage, dramaturgy and sometimes text. Many problems tend to occur with usual French institutional theatre. Indeed unlike video and lighting, music uses the same medium as the voice so the blindly well protected spoken text. Many theatre directors have a deep lack of culture and interest for music. They have no clue and no abstract concept about how to integrate it in a show. For them it is often just a figurative effect. This problem is less perceivable outside of France. German spoken countries for instance have a real culture for stage, for theatre music, for theatre and for music. This is quite similar from what I have seen in Korea at Intermedia Performance Lab. This is why La Nuit les Brutes is a little difficult to classify in France. Working for a theatre music piece reminded me the years when I was working at the Forum fur Neues Musiktheater at the Stuttgart Staatsoper or when I work for dance shows. 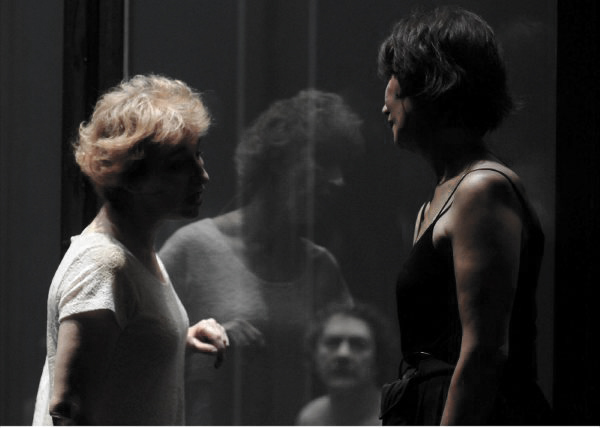 For musicians, it is an interesting challenge to respect both the logic for music and for the dramaturgy. For instance events or apparitions are sometimes physical and tightly synchronized with actors gestures (~100ms). This is the reason why I automatized many things like the glasses etc…
The tessiture and dexterity of the accordionist allow writing a music which is sometimes similar to piano with possible additional long notes. Most of the time, a very thin filter is applied to the bass voice, in the cage. This trio between the bass, the accordionist and the live electronics allow a wide range of possibilities in terms of meaning thanks to the voice, in terms of tessitures with the accordion and in terms of dynamics with the electronics. This instrumentarium oscillates between beautifully written tonal “”quotations”” of Robert Schumann and Frédéric Chopin and short timbral improvisations. When needed, some written atonal music stands in the middle of all that. The music of this show has to be perceived like a rich range that fit the best with the rest of the show. This is the clever thing about it. 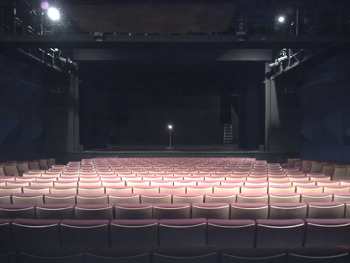 the box is not setup on stage yet

The electronics consists on live processes on the actresses voices, the bass and the accordion. There are also many fixed sounds. Once again, here, the esthetics oscillates between stylish acousmatic articulations and a more minimal electronic music type. For instance, the direct sound is entirely cut when the Brute dies and Maria and Ethel get inside the cage. Remain fast moving transformed and delocalized voices in the hall. We understand what they say. Crackling sounds rhythmically evaluate underneath with an additional very loud 80 Hz continuous sine bass. This bass comes from a previous pitched unison with the accordion. Suddenly the brute bestirs itself and a huge, impressive, movement pops up with some synched blinking of the glasses. Then everything instantly stops and this is the end. anne alvaro in front of glass box of the beast