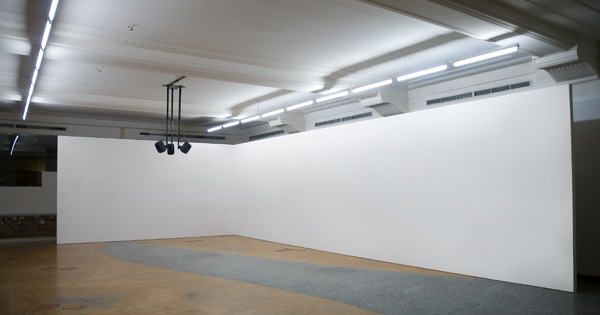 The work from Florian Hecker is a 5-channel piece where the perceptual organisation of a sequence of tones changes according to the position of the visitor to an apparently monophonic piece in which a single, directional loudspeaker points towards a tiled section of the wall; here, the localisation of the emitted sound oscillates between the speaker and the reflective white surface. 2 x 3 Channel consists of two separate 3-channel pieces which rotate simultaneously – one clockwise, the other counter clockwise – around three speakers. A seemingly ever upward moving sonic structure alternates with a sequence of tones illustrating Diana Deutschs Tritone Paradox. The final 2-channel piece, Magnitude Estimation, features a voice reading the loudness values of a given sound. These same utterances are emitted synchronously from an opposing loudspeaker, creating an auditory chimera while doubling the voice, the signification and the measurement of what one hears.

The display of loudspeakers – either suspended from the ceiling or wall mounted – creates a multimodal amalgamation of auditory and spatial components, constructing an invisible architecture within the gallery, where boundaries are demarcated by the transitions between one sound work and another.

The sound pieces in this show will entail distinct requirements for their installation. But what is constant is the dialogue between the micro, meso, and macro sonic levels. Housed in a renovated veneer factory from the 1930s, the Chisenhale Gallery plainly shows its industrial past. Five large T-bars cross the ceiling and divide the otherwise open space. This architectural structure appeared to me an intuitive fivefold division of the gallery, and superimposing a conventional exhibition design felt somehow out of place. It became clear that a temporal layout of the four works would be my approach, and this sequence, from one piece to another, mirrors the internal spatial logic of each piece.

The first up in the show, Magnitude Estimation, features spoken-word sections that had to be recorded in an anechoic chamber. John Cage often mentioned the anechoic chamber as an important influence on his interest in silence, which lead to his composition 4′ 33″. Due to its highly absorbing acoustic properties, such a space offers a magic, intense experience of sonic dislocation. All the day-to-day environmental noises that we take for granted as the cues for our spatial orientation seem to disappear, and a whole other auditory world arises. (You can hear the sounds of your nervous system, blood circulation, and bodily fluids, for instance.) It was exactly this perceived otherness and its very effect on the performers’ vocal inflection and accentuation that interested me.

Magnitude Estimation will be followed by 2 x 3 Channel. This work consists of two separate three-channel pieces that rotate simultaneously around three speakers. One rotates clockwise, the other counterclockwise. Depending on the viewers’ auditory focus, one part is heard in the foreground, the other in the background. In the second section of this work, the conflict of the directional auditory perception of both pieces is complicated and intensified anew. A seemingly constant ascending sonic structure alternates with a sequence of tones in the style of Diana Deutsch’s Tritone Paradox. Here, an additional dimension can be heard besides the circular movements in the work. Auditory Scene, the final piece in this temporal order, presents a sequence of five short tones that may be arranged depending on the viewers’ position in the gallery.

This multitude of perspectives and the perceptual organization the show creates––which change according to the very position of visitors and the direction of their attention––emphasize the impossibility of a unified description or consensus as to what has been heard, from where, at what time, and by whom. In each of the pieces, one can witness a certain decoupling of the perceived sound and its visible source.